The Ocelot is a medium-sized small cat, also known as the "Painted Leopard" due to their distinctive markings on the fur (with spots and stripes). In colour, they are closely related Margay, and are native to the tropical jungles of South America. They were under threat of extinction in the 20th century for being hunted for their fur. The Ocelot is a strong and flexible cat that can climb, run and swim well unlike other cat species.

It has a short, thick, and velvety variation of tawny-yellow to reddish-grey fur, marked with black chain-like rosettes on the back and sides. There are dark spots on the legs; and stripes on the head and face. Their long tail is generally marked with dark rings and large paws.

Male Ocelots tend to be larger than the female Ocelots and grow up to 1 meter in length with a tail half their body size. It has sharply pointed front teeth along with blade-like teeth in each cheek.

They can also be seen in the dense jungles of the Amazon Basin, and inhabit different habitats from southern Texas to northern Argentina. Due to its adaptable nature, it can be found in an array of different habitats, including tropical forests, grasslands, mangrove forests, and marshes. They are also known to inhabit the slopes of the Andes Mountains, and are also seen at 3,800 meters height, and even in seasonally flooded forests close to human living areas.

It is a solitary animal, with males patrolling the territories that are bigger (nearly double the size) than that of the females' territories. They communicate with each other with soft meows, which eventually turn into loud yowls while looking for a mate.

It is nocturnal by habit and spends days sleeping. They sleep either in the dense vegetation or on a high and leafy branch. They have admirable power of vision, touching, and hearing which collectively help in hunting at night.

Young Ocelots are known as "kittens." 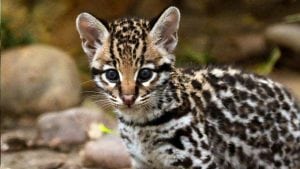 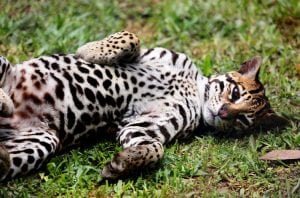 Did you know? These kittens are usually born blind and that they have a thin coat of dark fur. However, within a month's time, these kittens start seeing and their fur becomes denser and more colorful.

The Ocelot is a carnivorous animal & hunts during the night by stalking its prey. Majorly, they prey on small mammals such as rodents apart from rabbits, birds, fish, crabs, lizards, and snakes, and at times a small deer. It is also known to feed on monkeys, turtles, armadillos, and anteaters.

These careful animals are also known to trouble domestic birds during the paucity of food.