Your digestive system has been working since the day you were born, and even before you took the first bite of your chocolate. And, the digestive system stays busy after your lunch for the next few hours. This process is called digestion. It allows the body to derive the nutrients and energy it needs from the food you eat. Our body needs food to to get energy, vitamins, and minerals from it. However, in order to use food, it must first be broken down into substances so that the various organs and cells in our body can use it. This is the job of our digestive system. The digestive system acts in stages to digest our food. Each stage is important in this system, as it prepares food for the next stage. The digestive system consists of different body parts that work together to turn food and liquids into the building blocks and fuel that the body needs. Here are the major stages of this system:

Chewing: Chewing is the first and an extremely important stage of the digestive system. Most of the people chew less before swallowing, even though it doesn't take much time and effort to chew food well. Chew the food completely until it is small enough to dissolve and be swallowed with ease.

Saliva is much more than just water, as it has enzymes to break down starchy food such as potatoes, breads, etc. while chewing.

Swallowing: It may look like a simple process to us, but it just doesn't happen like this. Firstly, our tongue pushes the food into the back of the throat, where the throat muscles push the food into a long tube that leads to our stomach. This tube is called the esophagus.

The muscles push the food along until it gets to our stomach. At the same time, a flap blocks off our windpipe, ensuring that the food doesn't enter the wrong direction. It can choke us. This flap is called the epiglottis and it works automatically.

When you swallow a small ball of mushed-up food or liquids epiglottis flops down over the opening of your windpipe to ensure that the food enters the esophagus and not the windpipe. Else, it could be a risk for life.

Stomach: The next stage is in the stomach. Our stomach looks like a sack shaped - letter J. It is attached to the end of the esophagus and has three important functions:

Food stays in the stomach for around four hours. While the food is there, more enzymes work on it, breaking down proteins that our bodies can use. Our stomach has the potential to kill a lot of bad bacteria for good health. It secretes acid and enzymes that help in digestion. The stomach is like a mixer, which churns and mashed together all the small clusters or balls of food that entered it through the esophagus and churned into smaller and smaller pieces. It performs this with the strong muscles in the walls of the stomach and gastric juices that also come from the stomach's walls. It also helps in killing the bacteria that might be in the food eaten.

Small Intestine: In the first part of the small intestine works with the juices from liver and pancreas to continue to break down our food. In the second part, food gets absorbed from the intestine and into our body through the blood.

It is a long tube that's about 6-7 metres long and placed inside beneath your stomach. If you stretch an adult's small intestine.

The small intestine breaks down the food mixture even more so your body can absorb all the vitamins, minerals, proteins, carbohydrates, and fats. Cheesy sandwiches, pizzas, etc. are full of proteins with a less amount of fats. It can help extract them with a little help from three friends: the pancreas, liver, and gallbladder. Those organs send different juices to the first part of the small intestine, which help in digesting food and allowing the body to absorb nutrients. The pancreas makes juices that help the body digest fats and protein. A juice from the liver called as bile helps in absorbing fats into the bloodstream. The gallbladder is like a warehouse for bile, storing it until the body needs it. 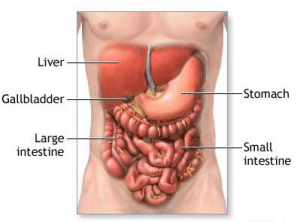 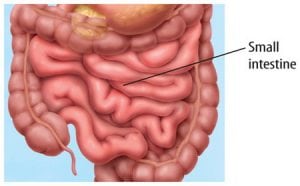 Excreta: After most of the nutrients are extracted from the leftover food, by the digestive system the useless waste left over is passed out of the body. Before it goes, it passes through the colon, where the body gets its final chance to absorb the water and some minerals into the blood. As the water separates from the waste product, the left out gets harder and harder as it keeps moving along, until it becomes a solid poop (also called stool or a bowel movement).

Must in diet: Your diet must contain bananas. Bananas contain approximately 15-20 percent of your daily fiber needs and fructooligosaccharide (a natural compound that encourages growth of beneficial bacteria). This bacteria is termed as "probiotics"-is responsible for many activities in your body, including facilitating digestion and elimination of food.

Green vegetables keep digestive system healthy as they contain high amounts of fiber, (relatively low) carbohydrate and sugar, and good amounts of water. Foods like spinach, wheatgrass, and alfalfa are all good to be integrated into your diet. Broccoli sprouts are unsurpassed in their ability to stimulate enzymes that detoxify the digestive system

Another thing you can do is to do some simple, exercises everyday. The colon functions much more effectively when the abdominal muscles are strong and consistently in motion.

Crunches strengthen these muscles and improve your appearance at the same time. In fact, simple walking can keep your digestive system healthy by improving blood flow to the intestines and colon. One of the studies show that women who walk daily were 31% less likely to develop colon cancer.