The pademelon is a small to medium-sized marsupial that is found in the forests of Australia and surrounding islands. It is closely related to the wallaby and the kangaroo.

There are seven different species of this animal i.e. pademelons, and they are usually found in the jungles of the far east. However, quite sadly, their population is rapidly declining mainly due to hunting, and deforestation, and other activities that result in their habitat loss. 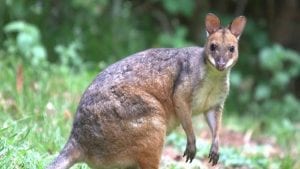 Pademelon is known to be a solitary, and nocturnal animal. It spends the complete daytime resting like a king and searching for food during the night like a hunter.

They are also found in Papua New Guinea and Tasmania.

When awake, it forages grasses, shoots, leaves, berries, and herbs, in the dense jungles.

Here's a question for you: What is the capital of Papua New Guinea?

Deforestation has caused a grave threat to the pademelon's population. In many areas, they are most commonly preyed upon by canine animals, including domestic dogs, dingos, foxes, and cats. In the Tasmanian forests, they have an array of predators like large birds of prey (like eagles, and quolls) and large snakes.

The female pademelon has a small pouch on her belly to nurse her baby (the young one) just like the Kangaroos have. The baby pademelon is usually born just 30 days later after mating and paves its way into the mother's pouch. The baby grows there, and it takes him or her six months to develop and grow before they venture out into the outer world.