Rani ki Vav is an intricately constructed stepwell situated in the town of Patan in Gujarat, which lays about 130 kilometres northwest of Ahmadabad. Patan is known for its unique weaving craft of 'Patola' silk sarees, which are produced in a vast process by the Ikat technique. Threads are tie-dyed to create the patterns even before the weaving process begins.

It was an ancient Hindu capital before it was sacked by Mahmud of Ghazni, and this happened in 1024 AD. Rani ki Vav is an exemplary example of its former glory. This is UNESCO World Heritage Site, and is situated on the banks of Saraswati River. This step-well is the finest structure in Gujarat, which is well preserved after it was restored in the 1980s. It is an identity mark of this place. It bagged the title of "Cleanest Iconic Place" in India at the Indian Sanitation Conference in October 2016. 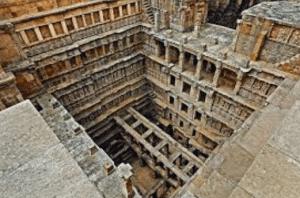 This step-well was constructed during the reign of the Chalukya dynasty. It is believed to be built in memory of Bhima I (1022-1064AD) by his widowed queen Udayamati. And probably, it was completed by Udayamati and Karna after his death. The step-well was later hideous due to the floods that took place in the Saraswati River, which is in its neighbourhood. It remained silted until the late 1980s.

Rani ki Vav was built in the Maru-Gurjara architectural style and has dimensions of approximately 64 m long, 20 m wide and 27 m of depth. It has several pillared pavilions at seven different levels. Fine and detailed carvings adorn the walls of this well. Most of the sculptures project devotion to the Lord Vishnu, who is depicted in his ten incarnations. It also depicts Nagkanya, Yogini and Apsaras. In fact, Apsaras are depicted in 16 different styles of make-up to look more attractive which is called as "Solah-shringar".