We learned in some of our other lessons that matter is made up of atoms and molecules. Millions and millions of these tiny objects fit together to form larger things like animals and planets and cars. Matter includes the water we drink, the air we breathe, and the chair we are sitting on. Gases, liquids and solids are all made up of atoms, molecules, and/or ions, but the behaviors of these particles differ in the three phases.

Matter usually exists in one of three states or phases: solid, liquid, or gas. The chair you are sitting on is a solid, the water you drink is liquid, and the air you breathe is a gas.

The atoms and molecules don't change, but the way they move about does. Water, for example, is always made up of two hydrogen atoms and one oxygen atom. However, it can take the state of liquid, solid (ice), and gas (steam). Matter changes state when more energy gets added to it. Energy is often added in the form of heat or pressure.

Solid water is called ice. This is water with the lowest energy and temperature. When solid, the molecules in water are held tightly together and don't move easily. 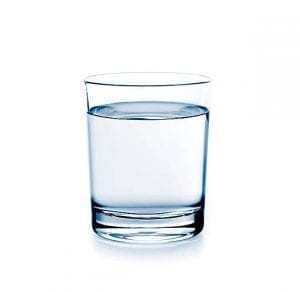 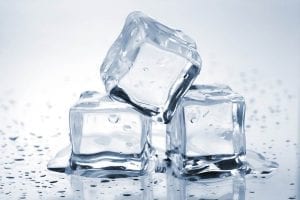 Liquid water is just called water. As ice heats up it will change phases to liquid water. Liquid molecules are looser and can move about easily.

Gas water is called steam or vapor. When water boils it will turn to vapor. These molecules are hotter, looser, and moving faster than the liquid molecules. They are more spread apart and can be compressed or squished.

There are actually two more states or phases that matter can take, but we don't see them much in our everyday life. 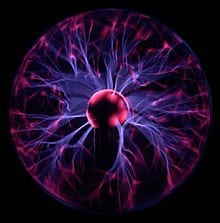 One is called plasma. Plasma occurs at very high temperatures and can be found in stars and lightning bolts.

Plasma is like gas, but the molecules have lost some electrons and become ions.

Another state has the fancy name Bose-Einstein condensates. This state can occur at super low temperatures.

Your desk is a solid, your drink a liquid, and, of course, the air you are breathing is a gas.

Gases are often invisible and assume the shape and volume of their container.

The air we breathe is made up of different gases, but it is mostly nitrogen and oxygen.

We can see through some solids like glass. When liquid gasoline is burned in a car, it turns into various gases which go into the air from the exhaust pipe. Fire is a mixture of hot gases.

Plasma is by far the most abundant state of matter in the universe because stars are mostly plasma.